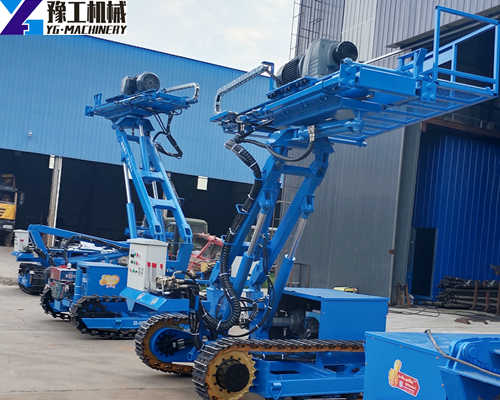 This drilling method uses a drill and a rotary cutter (drill bit) is used for drilling. And punch the bottom of the hole with a pneumatic hammer. The excavated material rises to the ground under the pressure of compressed air with a hammer. This type of drilling rig is powerful and has a high drilling speed, especially in rocks. For artesian wells (wells in which water naturally rises to the surface under groundwater pressure) or geothermal drilling, air injection at the end of the drill pipe pushes the water up the hole. This allows the operator to immediately determine the water flow encountered.

This type of borehole drilling rig machine is used on the hard and cracked ground up to 4000 meters deep. When the drill bit is eccentric, a casing propulsion system (where the pipe is installed by gravity) can be used to drill the hole. The system will strengthen the hole as the drilling progresses.

The drilling rig machine used for this type of drilling can also be run on the percussion system. But the rig is still located outside the borehole. They are mainly used for small diameter drilling. For example, it is used for mineral exploration or to install tie rods in rocks. This drilling system is used for shallow drilling. Because the ground structure drilled through may produce significant deviations. This drilling rig can work in any direction.

This is a type of rotary drilling that uses a worm (auger). This type of drilling is mainly used for loose clay or sand. The worm will bring the excavated material directly to the ground. For deep hole drills, the auger needs to be lifted regularly to empty its digging material.

Core drilling is similar to rotary drilling. But it uses the top to extract a sample inside the tool, called a core.

Percussion drilling refers to the use of tools and drills to break rocks under the action of gravity. This type of drilling can only be used vertically. In order to prevent the borehole from collapsing, it needs to be protected when drilling. Once the drill cuttings interfere with the drilling, replace the drill bit with a flap valve guide tube and reassemble the drill cuttings. The flap valve guide tube is a tube with an inclined flap at the lower part. The inclined flap can fill the pipe with excavated material and then transport it to the ground.

Jacking pipe drilling is mainly used for the installation of horizontal pipes. The pipe is gradually pushed through the impact. At the end of the drilling operation, the excavated material is removed by water injection or using an auger (endless screw). This technique is especially used to avoid transmitting vibrations to surrounding buildings or to avoid trenching.